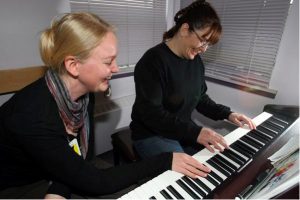 Journal Arts Writer Elizabeth Withey wanted to know: Do the arts exist in Alberta jails? In recent months, she visited three federal prisons — Bowden and Drumheller Institutions for men and the Edmonton Institution for Women — and got to know inmates with artistic practices, as well as the people who support their creativity. Read their stories in this three-part series, Art Behind Bars. Today: Play it again, Samantha: Piano lessons bring joy, and life skills, to inmates at the Edmonton Institution for Women.

Wednesday: “What I’ve learned doing my time is I’m an artist.” An ex-convict discovered her creative gene inside the walls.
The piano lesson starts with scales.

“Do you know B flat?” the teacher asks.

In unison, they recite a mnemonic device to remember the order of flats: “Battle Ends And Down Goes Charles’s Father.”

“So, how many flats are in B flat?” asks the teacher.

“Which are …,” The teacher’s voice trails off.

Music was not part of Teresa van Wijk’s life before she went to jail, she explains. She was a prostitute and drug dealer in Red Deer, hooked on crack and needles.

“Anything I could get in my system and get high on was pretty much what I would take,” van Wijk says.

Her high-risk lifestyle was fraught with violence. “It comes with the territory. That subculture is tremendous.” One of her three sons left Red Deer to get away from his mom’s reputation.

Van Wijk did not expect her criminal ways to catch up with her. “I never thought I would ever go to prison. I thought I was infallible. Because of my crap upbringing and crappy life, I never thought any judge would send me to jail.”

She was wrong. In 2009, van Wijk was sentenced to three years in prison for trafficking cocaine.

With her music teacher, Beth Schuld, van Wijk works through the 12-bar blues on an electric piano in the prison chapel. The room feels a bit like a doctor’s office: muted lilac wall paint, potted plants, upholstered chairs. The door is closed, but the chatter of women trickles in from the hallway. Then, over the loudspeaker comes a stern female voice: “Attention all residents … .”

Through the venetian blinds, you can see green grass, sidewalks, picnic tables. It’s a typical spring day; sunny, with rain threatening. Groups of women walk past in sweatpants. For a moment, you’re fooled into thinking it’s a city park.

But then you see the 2-1/2-metre chain-link fence with razor wire coiling along the top. And the guard in blue uniform.

Van Wijk shuts out that world, steers her full focus to the black-and-white keys at her fingertips. First, she practises the right hand, counting aloud: “One and two and three and four and … .”

Then she tries the music hands together.

“That’s hands together!” Schuld says. “And each hand is totally doing something different from the other! That’s awesome.”

Schuld teaches at the prison every Friday. Her lessons are not part of a formal prison program; they are a grassroots effort dreamed up by Eva Bostrand, who also directs the prison choir.

Community fundraising pays Schuld’s salary. At present she has seven students, though the number fluctuates as inmates are released.

When the 34-year-old agreed to teach music to inmates, she worried it would be difficult and draining, a chore. The experience proved otherwise.

Dealing with the wandering minds of children is far more challenging than working with respectful, enthusiastic prisoners whose energy is infectious. “It’s sort of like utopia for a music teacher,” she says. “Sometimes at the end of the day I leave there just floating. I float out of there.”

She doesn’t know her students’ crimes. “I’ve never asked and they’re never shared,” she says. “Half the time I’m with them I forget they’re even prisoners.”

Van Wijk had never touched a piano before she moved into “Club Fed,” as her kids like to call the federal institution for women in the city’s west end. Taking music lessons in jail was a way to “do something productive with my time,” she says.

But while van Wijk has time in abundance, it’s difficult for her to practise between her weekly lessons. The chapel is often booked; van Wijk is lucky if she gets access to its electric piano twice a week. In the housing unit where she lives, the only keyboard available is a mediocre contraption that sounds “like an accordion,” van Wijk says. Plus, it doesn’t have a stand, so players have to set it on the wobbly ironing board or across two chairs. “But then you’re hunched over.”

“Teresa is really gung-ho,” says Schuld. “If I’m talking in the lesson, Teresa is playing a scale while I’m talking. She won’t let me waste a second of her lesson. I’ve never had someone refuse to stop playing.”

Toni Sinclair, executive director of Edmonton’s Elizabeth Fry Society, an advocacy group for women and girls in the justice system, says it’s common for prisoners to turn to art while they are incarcerated.

“They seek out coping mechanisms they might not have ever tried before while they’re inside,” Sinclair says. “Some are healthy, some are not so healthy.” Music lessons are a positive way of coping, she explains, unlike self-harm, drug abuse and suicide attempts, which are all too common in women’s prisons.

So how do some prisoners manage to choose creativity over self-destruction? Sinclair says it’s in part having a key relationship with someone who supports and encourages them.

And Schuld has made that her mission. On the surface, she is teaching prisoners how to play an instrument. But her aim is also to boost their self-esteem and teach them life skills — stress management, discipline, problem-solving.

“It’s my job to build their belief in their ability to solve their own problems,” she says. “Once you get a student into the habit of solving problems for themselves, there’s no stopping them. And it’s easy to see how that would benefit them, outside of music lessons.”

Van Wijk brims with pride at her new-found talent.

“Learning to read music, what a tremendous accomplishment, considering I thought I was tone deaf,” she says. “I used to think I’d get an extended sentence for singing!” She laughs at her own joke.

Prison chaplain Snowy Noble witnesses first-hand the positive impacts of music on the inmates. “Everyone wants to be heard and seen, to show that they matter. Art gives that opportunity. It provides a touch point for esteem, then affirmation.”

That, in turn, makes his job easier. “It helps in my onward discussion with the women as they access me for counsel. I can always tap into that when they’re getting low.”

The demand for musical opportunities at the women’s institution is significant; there is a waiting list for lessons with Schuld, and the choir has doubled in size since it started. Noble hopes that might influence the institution to step up and formalize the music programs, but warden Andrea Markowski says their power comes in part from volunteer partnerships.

“When folks come here and help the women just because they want to, just because they’re moved to, they’re able to touch the women on a different level (than staff ) and I wouldn’t want to tamper with that,” Markowski says. The prison can’t do everything, she says, “nor do we wish to. The rubber meets the road in the community.”

And a waiting list isn’t necessarily a bad thing, she adds: “Then the women really value it when the opportunity comes along.”

At present, the women’s prison contributes $5,000 to the volunteer groups who run the choir and music lessons. That’s a spit in the ocean compared with the expense of keeping a woman behind bars. It costs an average of $175,000 a year ($479 a day) to incarcerate a female inmate in a federal prison in Canada, according to the Elizabeth Fry Society, and that number can rise to as much as $250,000 a year if the inmate is kept in segregation.

“We face a lot of demands for our dollars,” Markowski says. “I just do my very best to do as much as I can, to be a good steward for public funds.”

But she leaves the door open for arts-related funding requests: “If I received a proposal, I would always look to that.”

Together, Schuld and van Wijk work through Carry Me Back to Old Virginny.

“Your last note is the quietest,” says Schuld. “What you were doing before is making all the notes quiet.”

“That was nice,” Schuld says.

“To do a smooth crescendo, it actually takes a lot of control. So I think you’re doing really good.”

“Bam! Thank you. It goes too fast,” van Wijk says. She packs up her things as Schuld’s next student takes a seat at the electric piano.

Music lessons were part of van Wijk’s plan to sort herself out behind bars. She also completed her high-school equivalency in prison and plans to go to university to take graphic design after she is released.

Return to Red Deer? Not a chance. “The people I used to hang with are still there,” she says.

The intense, often short relationships Schuld has with inmates is by far the biggest challenge of her job. “Just when they’re getting to a point where I’m really excited about what they’ve learned, they get released. That’s the hardest part.”

Will van Wijk become a concert pianist? No.

Will piano skills get her a job on the outside? No.

Will music lessons guarantee she won’t slip back into her old ways after her release? No.

But being able to play ditties like Yankee Doodle and Old MacDonald Had a Farm has taught van Wijk to believe in herself. And they’ve given her something to look forward to.

“No matter how corny the tune is, I like that, when I get out of here, I can play these songs for my grandchildren,” she says.

Update: Since she was interviewed for this article, Teresa van Wijk has been granted parole and is now living in British Columbia.